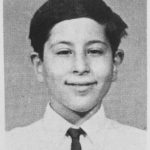 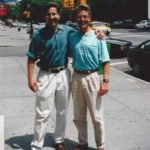 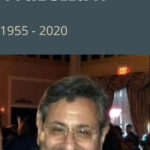 Worcester – Michael Warshaw, 64, passed away unexpectedly June 12, 2020. There was no inkling that on this particular Friday evening Michael would take flight; he was here, and then suddenly, he was gone. This much can be said: He left behind many broken hearts, among them his wife Donna, his sons Christopher and Michael Higgins, daughter-in-law Jill Epstein, three adored granddaughters: Olivia, Chase, and Rhyen; his father Fred, his sister Lisa Warshaw Ellis, along with a host of relatives, in-laws, friends, and a dog named Buster. He was predeceased by his mother Sybil, who passed away 31 years ago.

Born in Brooklyn in 1955, Michael and his family would travel to lands much more exotic than that New York borough before making Worcester his home. Singapore, Thailand and Puerto Rico were some of the places where he attended school. Moving so much made forging friendships difficult for a Jewish kid from Brooklyn.

“He was always the new kid, so books became his friends,” said his wife. The written word would become everything to Michael, whose curious mind clicked along regardless of location. He would eventually attend Clark University, where he fell hard for both the city of Worcester and his Vernon Hill landlady, Donna. Michael was unfazed by the idea of becoming a stepfather to her young sons who, as Christopher put it, saw him as “an alien that landed here.” Years of winning over strangers had given him the confidence to tackle teenagers, becoming part of an Irish Catholic clan might have been trickier.

“When you met Michael, he was interested in you, and asked all about you,” his brother-in-law Dennis Clarke recalled.

“Title this ‘New York Jew Infiltrates Suburban Family’,” chuckled Chris. Chris remembered Michael as Dad fondly, adding: “He was not always perfect, but he was a good father figure, no doubt. The best gift Mike ever gave me, and it is one that I try daily to replicate, is how to love and how to be loved.”

“He was such a good grandpa to me, and he could always make me laugh when I saw him,” said Olivia, 15, remembering the grandfather who illustrated a “Fat Fairy” book for her birthday based on stories he told her.

“He was so fun,” said Chase, age 12. “It was hard to have a frown around him because no matter what mood I was in, he could make me smile.”

Michael pursued a career in journalism, along the way working both in radio and in print for INC. Magazine, The Boston Globe, and Worcester Magazine. He would switch gears eventually, working for Raytheon, where he was employed at the time of his death.

I worked with Michael during his tenure as editor of Worcester Magazine. Words mattered, and he knew how to make them tell a story that was never dull, always accurate and highly readable. Over the past 25 years, I’ve worked with countless editors, and Mike was one of my favorites, though you would never know it if you witnessed a conversation between us over content. We had heated arguments about my columns at least twice a month, and the denizens of his editorial teams can attest to that. If I got too political or national he would rein me in by saying: “This is WORCESTER Magazine, Janice. Write about WORCESTER.” Sometimes, I won the argument, but not often. He was a very good editor and an even better writer. He had fun writing, you could see it when he dreamed up a cover story, or a snappy headline. When one of Worcester’s greatest unsolved murder mysteries – the Candace Scola homicide – was a hot story, Mike’s cover was a beauty. “Everybody Thinks He Did It” brought fireworks from attorneys. It flew off the racks. He hijacked my cover story on Worcester celeb Denis Leary by insisting that he come along for the interview. He steam rolled me every time I tried to ask a question but my favorite Mike moment came when we first arrived, and he turned to me and asked: “Does my hair look good?”

Michael Warshaw was born in the wrong decade.

He should have entered this world 20 years earlier, to experience firsthand the uniquely American culture and history that were the ’40s and ’50s. Michael knew more about film noir, World War II and everything from “Alfred Hitchcock Presents” to “Masterpiece Theater” to “Howdy Dowdy” than any person you’d ever meet. He could pick Adolph Menjou out of a crowd, recite every line from Casablanca, and tell you the backstory about every B movie ever made. The home he shared with Donna is filled with movie memorabilia, a vintage jukebox, radios and neon signs- not knock-offs. The real deal.

Mike adored celebrities, but not just the A-listers. He saved much of his affection for the stars who ended their careers as trivia questions, like Julie Newmar, or Butch Patrick. His appreciation was for the entertainers who made a living simply by making us smile. The day after he died, I watched “Gun Crazy” on TCM. It’s a film noir classic, starring John Dall and Peggie Cummins, though few people I know have seen it. I had to stop myself from grabbing the phone to text Mike about it. He would have known why Peggie’s career never really took off and agreed with me that John Dall was Jake Tapper’s doppelganger.

The last exchange we shared was something I will always cherish. We text-watched together “Casablanca” during quarantine, only a few weeks ago. We tried to beat each other to the lines, and we chatted about Peter Lorre. It was a typical thing for two people who also shared a silly love of talking chimps and corny jokes. In fact, I can hear him saying to me as I write these words: “This goin’ somewhere?” Janice Harvey

Graveside services at Notre Dame Cemetery 162 Webster St. Worcester will be held for Michael at 11:00 AM Wednesday, June 17, 2020. A celebration of Michael’s life will be held at a later date. In lieu of flowers please donate in Michael’s name to the charity of your choice.