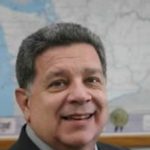 Valentine’s Day is a day to celebrate the ones we love the most. So it was appropriate that hundreds of friends and former colleagues of Dr. Arthur H. Himmler gathered at Oberlin Church in Steilacoom to remember someone very near and dear to their hearts.

Dr. Himmler, or “Art” as many new him, died in a car crash on February 7, 2013 in eastern Washington. He was 68 years old. Himmler was the superintendent of the Steilacoom Historical School District from 1994 to 2009. It was a time of great change for the district, and Himmler was there leading the way in every way, shape and form.

During his memorial service on Feb. 14, friends and family shared memories about a humble man who loved music, loved his family, and loved life.

Retired general John Hemphill touched on many of Himmler’s accomplishments both as a Kiwanis member and as superintendent, including the rebuilding of Saltar’s Point Elementary, remodeling the high school, bringing Chloe Clark Elementary online, and integrating computers into the district.

“There comes a time when a man must choose between what is right, and what is easy. Art never failed to choose the right,” said Hemphill.

Himmler led the charge in getting the school district’s boundary changed so all of DuPont’s city limits was included in the Steilacoom School District boundary.

“He was a great man. I will never forget him,” remarked Hemphill.

“What do you do at night in Omak? You sit outside with Art and Noi, look up at the sky, and watch for the first satellite.”

For two hours, friends from across the state shared stories about a brilliant music teacher who loved the outdoors and made everyone smile. Himmler was described as the ‘god father’ of WAVA, or the Washington Virtual Academy. He touched the lives of children, parents and educators from Hong Kong and Bangkok to Washington’s Orcas Island, Carbonado, Steilacoom and Omak school districts. He was someone who could see the good in every child, and in all of us.

Above everything, Art placed his family first. The best part of his life was his wife Noi, and daughters Ja-ay, Apple and Elna.

“He was my Indiana Jones,” she said.

“Do something that will make a positive impact in their life.”

She also encouraged all who loved her father to act and be just a little more like him.

Based on those who loved him the most, that would include being humble and a good listener. Be a positive role model. Show kindness and compassion no matter what. And always, put your family first.

“He was a brother and a dear friend. Art loved the Lord. I know for certain we’ll see him again someday,” offered friend Duane Hardesty.

Until then Dr. Himmler, Cheers.