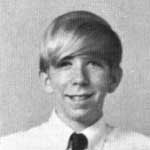 I met Joe and his brother Mike during the 7th grade at ISB. Mike was my age (73) and Joe was in the class of 72. Mike and I became best of friends and played in a band called the Midnight Hours. The group originally formed in 68 with Mike and Mark Rosenfield. The group grew and went through several personnel changes with one being that Joe joined the group as the rhythm guitarist. He had learned guitar quickly by playing along with us through the wall of his bedroom while the band practiced in the other room. We finally asked him if he wanted to join the group. I spent much of my time at the McMurdo house since the band practiced there. I soon learned that my father (Air America pilot) and Joe’s dad (Col/USA) were connected by work.

Joe was indeed a character. Smart, witty and full of adventure. Joe got me into the tea dances that use to be held at the Chaophya Hotel on Sundays. Mike and I would be his guests since we were not old enough. It was there that Joe taught me how to “elevator surf.” We would send the elevator to the top floor, then race to the roof of the hotel and access the elevator room. When the elevator got to the top floor, we would climb down onto the coach roof and ride up and down, inside the elevator shaft. We could look down into the elevator and see the people. They couldn’t see us. Occasionally we would see GI’s with some of the “local talent” alone in the elevator. I saw things I shouldn’t have.

Another thing Joe was into was chemistry. He would buy nitro glycerin and we would play with it. He learned to make gun powder and made bombs with it. Not big ones though. We would set them off in a vacant field near their house. He also built and launched those Essex rockets that you made from kits. He learned how to make this stuff we called “touch explosive.” It was an ammonium/iodine complex that was unstable and would pop/explode when touched. He painted it on everything and for a while, you could not walk through the McMurdo house without stepping on or touching some. Joe and I would paint it on the hand rails of Thai buses and sit in the back to watch the Thais jump as they set it off. It was everything we could do to not laugh and get caught as they looked around to see who did it. The stuff never hurt. The pop your hand or fingers felt was more of a surprise…..like getting a static electricity shock.

When the McMurdo’s left Thailand (1969), they ended up in Hawaii. On a summer trip (1970) back to the states, I stayed with the McMurdo’s. Joe was driving by then. He had bought an old British Hillman (barely running) out of a nearby junk yard. Joe, Mike and I worked on the damn thing all summer, rummaging through junk yards to get parts to keep it running and to fix it up. We patched all the rust we could and had it painted fire engine red. The car was our means to go bodysurfing at Makapu Beach on the other side of the island. Something we did almost every day. With the windows down, the radio blaring and the Hillman straining and backfiring, we would drive up and over the Poly-Highway, all the while wondering if we would even make it. Life was never better. We went to concerts. Even saw Jimi Hendrix! Sometimes we all would go surfing before dawn to avoid the serious surfers who didn’t like beginners on “their” waves and would let you know it too. None of us could surf worth crap. Terry Rodgers (72) and her brother Steve also spent some time living at the house. Terry had been in the Midnight Hours as the organist. Terry and Joe became attached. It was the best summer I ever had.

It was about September of 1972 that I learned of Joe’s death. We had just moved back to the states in August and saw Joe’s mom who had come in from Hawaii to visit family friends who lived near us in Texas. Joe died in an auto accident at about 3:30AM, August 8, 1972, on I-80 in Rawlins, Wyoming. He and Terry Rodgers were hitchhiking back to the West coast on their way back to Hawaii. Joe was killed along with the driver. Terry had just earlier switched seats with Joe to get some sleep in the back seat of the VW bug they were in. During the late night drive, it is believed that the driver fell asleep and drove off a rise and smashed down onto a concrete embankment. Terry barely survived with serious injuries.

Years later, I saw Terry at an ISB reunion (Clearwater 94) and she told me the story. Joe was a good friend. I still miss him.