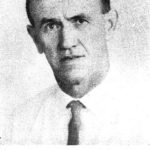 From: Gary Earney
To: GBNF_ISB@isbnetwork.com

Mr. Le Pallec graduated from Anger University, in France, with a B.A. I remember him as a wonderful French teacher during my 3 years at ISB, caring but demanding, and with a great sense of humor. He had lived in Thailand for quite some years by then, and was fluent in Thai. I remember him fondly. He enriched my experience at ISB. The other French teacher at the time was Madame Francoise Pundarik, who taught French I.

After I graduated in 1965, I worked as a civilian for the US Navy in Bangkok, with the OICC/SEA office on Silom road. During that time, Mr. Le Pallec died during some type of altercation at his home; the Bangkok World carried an extensive article on it at the time. I remember sitting in High School Principal Shelton Marlow’s office shortly thereafter, discussing with him and other students what could be done. Although I lived in Bangkok for many months thereafter, leaving for college at Oregon State University’s College of Forestry in June 1966, I was never able to discover more information about Mr. Le Pallec’s passing.

Thank you for adding Mr. Le Pallec to the GBNF listing. I really appreciate your work, and David’s, on this effort. It brings closure to a lot of us who wonder over the years, whatever happened to….