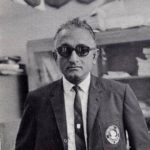 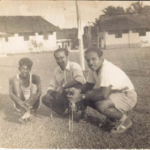 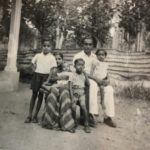 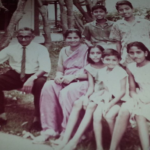 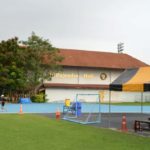 A tribute by Agnes P Thambynayagam

Ponnudurai Emmanuel Rajendra was a teacher, coach and director of physical education and athletics at the International School of Bangkok, Thailand from 1962 until his death in 1972. The ISB honored their beloved teacher by naming their main Gymnasium as ‘Rajendra Hall’. Rajendra was born in Malacca, Malaysia in 1920 to Jaffna Tamil Roman Catholic family. Rajendra’s parents sent their son to Sri Lanka to have his education at Jaffna St Patrick’s College, a Private Catholic School. After high school graduation, Rajendra taught geography and athletics at his Alma Mater, St Patrick’s College from 1940 to 1942. In 1943, Rajendra joined St John’s College, an Anglican Private School, in Jaffna as their Sports Master. In 1945, Rajendra was hired as the Ceylon National Athletic Coach. He graduated from the University of Ceylon (Sri Lanka, Colombo campus) with a Bachelor of Arts degree in 1950. He then continued his studies at the University of Iowa in the USA with a full scholarship after he won National championship in Sri Lanka in hurdles and other sporting activities. He earned his Master of Arts degree from the University of Iowa in 1951 in Physical Education. In 1962, Rajendra left Sri Lanka to Thailand to work as the Director of Physical Education and Athletics at the International School of Bangkok. The family joined him at the end of school year in 1963.

The article ‘The Roaring Forties – War & Aftermath (1940-47)’ wrote about the Patrician P E Rajendra who taught at St Patrick’s College and then at St John’s College. It stated, “1944 was the year in which those who were fortunate to witness the Inter Collegiate Athletic meet will never forget it. The St. Patrick’s team had been winning the championship for the previous 10 years and were considered invincible. The Johnians were improving and had been runners-up to them the last two years. In 1944, they were being coached by Mr. P. E. Rajendra who was determined to make his team champions. The huge crowd anticipated a keen contest. They were not disappointed. Both teams were neck to neck with 73 points each until the very last event of the day, the 4 x 440 yards relay. After the first 3 laps it looked as though St. Patrick’s would carry the day. They had a 10-yard lead when their captain, Keil, took the baton. But the Johnian anchorman P. Tharmalingam showed true grit and fighting courage and ran the race of his life for his college, just pipping the Patrician at the post. Pandemonium reigned as the crowds surged into the field – and the Johnian supporters hugged and kissed each other with tears of joy running down their cheeks. P. Tharmalingam had earlier won the long jump and A. R. Rasiah had won the high jump and pole vault events while S. Nadarajah won the mile and V. A. Benjamin the low hurdles among the seniors. Of the Juniors, A. W. Yogarajah had come first in the 100 & 220 yds. and also helped in winning the 4 x 100 yds. relay for St. John’s. It was a fitting farewell to Mr. P. E. Rajendra who was leaving the College. Later in life he went on to become a National Athletic Coach and was one of those who helped N. Ethirveerasingam to break the Asian Games High Jump record at Tokyo in 1958 in winning the Gold Medal for Ceylon (Sri Lanka).” (The Roaring Forties – War & Aftermath 1940-47, para 31). Rajendra was undoubtedly one of the most outstanding sportsmen and a coach of the twentieth century Sri Lanka.

A Patrician, Victor Cherubim wrote on June 30, 2020, “Master P E Rajendra was a mentor, teacher and Sports Master of mine at St Patrick’s College when Rev Fr T M F Long was the Rector (1936 -1954). He was an inspiration to Master S F Santiapillai who went to study Library Science and the Dewey system of cataloging in the United States. Master Rajendra, at the turn of the Fifties, had propagated the dream of what one could do to excel in Sports in the States. He helped N. Ethirveerasingam, a Centralite and Ceylon record holder High Jumper, to train in the United States. I am proud to state that Master Rajendra sowed the seed in my mind to enable me to apply for scholarship later to study in the USA. He will always be remembered for his bubbly personality and charisma.” Rajendra Master also sent his own children to the USA for higher education after they graduated from high school in Thailand.

Victor Cherubim wrote again on July 13, 2020, “Our Rector of St Patrick’s College (SPC) Very Rev Fr T M F Long (MA Cantab – University of Cambridge) was diligent in scouting the best talent for Sport. He knew SPC had a good football team at that time and beat other Colleges in Football, JSSA (Jaffna Schools Sports Association) Tournaments. I can remember one Perampalam who was our fullback and was feared by many of our opponents in the Sports field. Master Rajendra was understudy to our College Coach B R Motha, an unassuming quiet man. If I remember right, Argus Tressider, Public Relations Officer, who served under Joseph C. Satterthwaite, US Ambassador at that time, was a good friend of Fr Long and helped Fr Long to get the Jaffna Public Library resourced. Master Rajendra to my knowledge was a confidante of Fr Long and helped him to promote a Carnival at College to get funds for the Jaffna Public Library. Master Rajendra was also involved in SPC Cadet Battalion.” The Jaffna Public Library members remember and honor Rev Fr Long for his initiative in building the Jaffna Public Library. It would be nice if Jaffna people could also honor Rajendra Master who helped Rev Fr Long in raising fund to establish the magnificent Library in Jaffna.

Nagalingam Ethirveerasingam wrote to Ernest Rajendra, “Your dad was my first coach as soon as I qualified for Helsinki games in 1952. Anthony Abeyasinghe advised me to improve the western roll style in 1951. Your dad was my strength coach. He took me with him to a PE teacher coaching camp in April 1952 to Maharagama Teacher Training college where Duncan White was lecturer. I then had three coaches. They were specialist in their areas. In 1955 Brayton Norton from USA was my 4th coach. Mr Rajendra who got his Master’s in Physical Ed and Norton together helped me to apply to University of California in Los Angeles which offered me admission and a Grant-in-Aid where I worked fifteen hours a week for tuition, room and board. In the last year, 1960, I had full scholarship. Many people helped me to feel at home in the USA”. William Clarke wrote to Ernest Rajendra, “Your Dad was my track coach in 1966 and 1967 at ISB. He was also my coach for Softball and Basketball. He was an unforgettable character whose memory stays as a lifetime memory. It is good to learn about his history since 1952 and before”. Rajendra Master had left unforgettable memory in sports and life amongst many of his students.

The International School of Bangkok alumni, students and teachers fondly remember their teacher, coach and director of physical education Master Rajendra. They are so proud that their favorite coach, Rajendra Master, rewrote ISB’s K-12 physical education curriculum and established a sports program that included eleven different varsity sports. During Rajendra Master’s era, the ISB teams participated in Thai and the US armed forces leagues for the first time. The ISB teams also entered for the National Thai School’s Competitions in track & field and Volleyball. Rajendra master’s student David Wilkerson (class of 1972) wrote, “Monday morning would find the indomitable patriarch of sports at ISB, Mr P E Rajendra, walking the length of the field checking for snakes before first period gym.” Khun Rabiab, a Thai staff member for nearly 40 years wrote. “I remember Mr Rajendra who was from Sri Lanka. He was the head of the PE Department and everyone loved him. He was kind to everyone.” Khun Boonterm, the ISB Security Guard for over 40 years wrote, “In the days at Soi 15 (festival) Mr Rajendra’s athletes won almost all sports competitions!” (Ref: From the ISB article, ‘How did Rajendra hall get its name?’)

Ponnudurai Emmanuel Rajendra met a beautiful protestant young teacher Hilda Pushparatnam who studied at Uduvil Girls College and taught at St Patrick’s College primary school. They fell in love and married in Jaffna where Hilda’s family lived. They were blessed with three sons and two daughters. They sent their eldest son Ernest to St John’s College to attend school. Their second son Leo and the youngest son Eric attended St Patrick’s College. Leo’s classmate George Francis wrote, “Leo Rajendra and I sat side by side in fourth grade. We were given separate little desks and green chairs. We became good friends. Leo’s mother Mrs Rajendra taught English to us. Leo looked exactly like his mother. Mrs Rajendra was a sweet teacher that we all loved her very much”. Another classmate Chelvanayagam wrote, “Rajendra Family lived three houses away from my house and I knew the whole family. His father was a professional coach and his mother was a teacher. I walked to school with Leo”. Other classmates of Leo also have fond memory of Leo and their beloved English teacher Mrs Hilda Rajendra.

Patrician and a sportsman Basil Patrick who was a friend and classmate of Rajendra’s son Leo wrote, “I attended the Group athletic meet held at Jaffna College in 1960 with Leo Rajendra where his Dad P E Rajendra Master was the chief guest and I received my certificate from Rajendra Master”. Jaffna schools honored P E Rajendra Master for his outstanding achievements in sports and scholarly work.

Rajendra family lived at Groussault Road near St Mary’s Cathedral in Jaffna prior to moving to Thailand in 1963. The daughters Christine Indrani Girlie Rajendra (Harrison) and Angeline Rajendra (Behrend) studied at Holy Family Convent, a private Catholic School for girls in Jaffna where I also studied. My family lived at Eachchamoddai, Jaffna since 1959 and I used to pass their house every day when I walked to school. My sister Vimala was in Christine’s class and my sister Antenet was in Angeline’s class. The children were studious and active just like their parents. Their son Leo Rajendra who studied with my husband Michael Thambynayagam followed the footsteps of his father, P E Rajendra Master to become an outstanding sportsman.