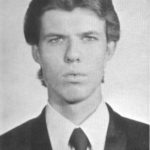 Jeff Thomsen was a friend of mine – we knew him as “Jesper” back in the old ISB days. Sadly, I just learned that Jeff died today in his beloved Bangkok; heart attack, they could not revive him. If I had known he was still in Bangkok all this time, I would have linked up with him during my time as a military advisor in the Kingdom, 1988-92. When the Facebook thing emerged, we got re-acquainted. I was hoping to meet up with him back in Bangkok one of these years . . . now it will have to wait for the Final Linkup in that big Blues Bar in the Sky . . . Farewell for now Old Friend . .

I just had a look at the list of friends no longer with us.

I still live and work in Thailand. I work in the insurance business, I am the manager of Bangkok Insurance Brokers Company. After ISB, our family moved to Pattaya and I became a scuba diving instructor. In 1987, I moved to Phuket and have lived here ever since. I couldn’t speak Thai very well while I was at ISB, but now I speak perfectly and read and write. I also help out occasionally as a court translator in the Phuket court-house.

Unlike many students of ISB, Jesper and I are both grew up in Thailand and we were friends long before our teenage years. After ISB, I didn’t stay in touch with Jesper (because I moved to Phuket)……or any other school buddies for that matter! One year I attended the American 4th of July celebrations in Bangkok. The event was held at the Thai Tobacco Monopoly grounds. (I am not sure but I think it was around 2000) I was walking across the field in front of the stage. Jesper was on the stage checking the equipment and he saw me. I didn’t know it was Jesper on stage because I hadn’t seen him in many years. Jesper barked into the microphone “Hey you!”…..once again, “Hey you, walking away from me!” Only then did I realize he might be talking about me. I was walking away with my back to the stage. Jesper said louder….”Hey, is that Eric???” Then I turner around and realized Jesper was trying to get my attention. We had a long talk after that. It was nice to reminisce on old times. I felt sorry for him because he told me that it was tough, working as a single father in Bangkok.

I remember one more incident that happened during our school days. Jesper and I used to ride the regular bus home along Sukhumvit Road after school. One day he happened to be riding a bus that was pulling up alongside the bus I was on. I was sitting on the right side of my bus and saw him hanging on the rear entrance steps. I yelled out a greeting in Thai. He yelled a Thai swear-word back. The buses were traveling at close-to-the-same-speed so we were able to exchange many threatening sentences in Thai. The other bus passengers thought we were going to jump off and fight each other. It was funny looking at all the worried faces wondering if they were going to see two farangs have an altercation in the middle of Sukhumvit Road. To this day, I never knew why we started that impromptu performance.

As a fellow classmate of Jesper, I would love it if you are able to add a few more details to his page. It would be nice if a few more friends could share some of their “moments” with Jesper so we can all have a better memory of him. I leave it up to your discretion to add this or edit parts of what I wrote.