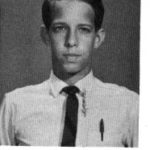 Anne Gregory Wrote: William Douglas Corpron ’70 (named after his grandfather’s best friend, Justice William O. Douglas, and his own father, Douglas) departed on February 10 this year, at the age of 66, in Yakima, WA.
His parents, a doctor and a nurse, helped start the Kwai River Christian Hospital in (or near) Sangklaburi in Kanchanaburi Province on the Burma border, in 1960. None of the Corpron kids graduated from ISB, but several of the oldest attended.  The family returned to the USA in 1967, I believe.
Peace be upon you, Bill!