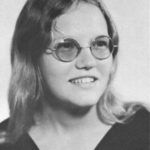 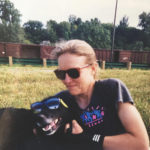 Carol with her dog Kelly, who was very supportive during her illness. 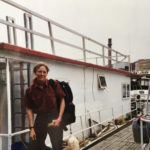 Carol beside her houseboat where she was living while attending grad school at University of MN. 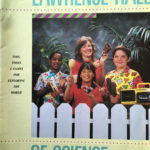 Cover of a catalog for the Lawrence Hall of Science at Berkeley where she worked for a while. 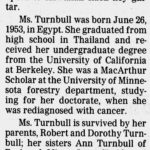 Carol Turnbull, former direc­tor of robotics and technical ser­vices at the Lawrence Hall of Sci­ence died in Berkeley on September 15 after a long struggle with cancer. She was 45 years old.

Ms. Turnbull was also an ac­complished athlete. She  won  a gold medal in swimming at  the Gay Games in New York in 1994.

Her varied life included work as a pastry chef at Cocolat in Berkeley. She also enjoyed coun­try -western dancing and had a love of music that ranged from opera to Hawaiian slack key gui­tar.

Ms. Turnbull was born June 26, 1953, in Egypt. She graduated from high school in Thailand and re­ceived her undergraduate degree from the University of California at Berkeley. She was a MacArthur Scholar at the University of Minne­sota forestry department, study­ing for her doctorate, when she was re-diagnosed with cancer.

Ms. Turnbull is survived by her parents, Robert and Dorothy Turn­bull; her sisters Ann Turnbull of Brainerd, Minn., Janet Sheldon of Monmouth, Ore., and Nancy  Loh of Sunnyvale; her brother, Lee Turnbull, of Iowa; nieces Haley Sheldon and Samantha and Lindsey Turnbull; and nephew Eli Shel­don.