A man of many stories, Brandon Christopher Smith was born in King City, California in 1946, the first son of Ed Smith and Joyce Yates. After his father was recruited into USAID, Brandon and his brothers were raised in Indonesia and Thailand. In 1966, he served with the Marine Corps in Vietnam, when the war was “still popular,” like after 9/11, as he was fond of reminding people. Following his tour of duty, he returned to Southern California to join the long-haired hippies, witnessing noteworthy riots of the day and claiming, decades later, that the agitators seemed too well-coordinated. During this time he finished college, majoring in Philosophy and minoring in Ancient Greek. Heraclitus and Epictetus remained his constant companions and teachers. Like his father, an ardent photographer both during WWII and throughout their travels, Brandon also developed a love for photography that stayed with him his whole life.

After graduating college, he served in the Army for the next two decades, where he developed the Army’s recruitment database and other interesting programs as an early pioneer in computer programming. During those years, he took up Tai Chi and fencing, and studied with Tom Brown, the famous tracker. He and his then-wife also went to hear the permaculturist Bill Mollison speak; later on, after retiring as a major, he moved with her and their three children to the Ozarks to attempt to live sustainably and closer to nature.

Brandon later took a job in Jefferson City as a database engineer, thus beginning a second, private sector career in IT consulting. Throughout these careering peregrinations he maintained lifelong practices in the martial arts (later as a teacher and coach), Daoism, and mixed-media arts. He brought his wide-ranging life experiences and philosophical training to bear as a mentor: a Boy Scout leader, a fencing coach, a hippie elder, and a retired officer.

In his later years he returned to an enthusiasm for photography and permaculture, letting his hair and his trees grow out, to his neighbors’ consternation and his great satisfaction. He performed with burners and fire spinners, while simultaneously developing as an artist of the manipulation of light, fire, and motion (both dance and tai chi) in photography. His work has been on view in a few galleries in mid-Missouri over the years. Eventually, his focus settled on nature therapy, and we imagine he would love nothing more than for everyone who reads this to go out today and spend some time in a mossy forest to hear what it has to say to you.

Although proud of his military service, he became frustrated with post-9/11 security theater, unreflective nationalism, and the military-industrial complex. He drove around with Marine Corps Combat Veteran plates, license number “CO XST.” (And no, he was never the Commanding Officer of an XST–try sounding it out.) He took a particular interest toward younger veterans with PTSD, and strove to bring them–as well as everyone else–the therapeutic and mindfulness benefits of both Tai Chi and nature therapy. Brandon kept up his practice of Tai Chi until he could no longer sit upright, maintaining his strength for a long battle with metastatic lung cancer caused by Agent Orange exposure during his service.

Brandon died at home on December 3, 2021, shortly after turning 75. He is survived by his brother Kirk and his three children Homer, Samantha, and Keenan. In his last months, he founded Redwood Twig Art Garden Studios, a nonprofit he had long envisioned as a center for art therapy, nature therapy, and mindfulness. A memorial service will be held on December 21, 2021 at the studio, with his art on display. To attend, please RSVP at https://memorialforbrandonsmith.rsvpify.com/
Fund.

Arrangements are under the direction of HOUSER-MILLARD Funeral Directors, 2613 West Main Street, Jefferson City, Missouri 65109 (573) 636-3838. condolences may be left online for the family at www.millardfamilychapels.com.

Brandon Smith
Hello, it’s a little strange posting through my late father’s account but I never would have found this site myself. My name is Samantha Craig (nee Smith), one of three kids and the successor-trustee for his estate. He passed in December and as we’ve sorted through his estate there are a huge amount of photos from ISB and his family’s time in Thailand while my grandpa worked for USAID. He was at ISB from 60-64, and in Indonesia for several years before that. His fondest memories were from drill team, Dynamite was his favorite horse!

I wonder if anyone is interested in old ISB photos when I get time to scan them? There’s a significant amount of drill team photos, but many others that are just photos of life. My grandpa was a prolific photographer and my father followed the same path (as have I). Some of the pictures are poorly preserved but there’s also quite a few stunning pictures.

In addition I have a lot of Thai and SE Asian art, furniture, silks, knick knacks, even a Bali dancer hat and a clove boat… I’ve been trying to find an appropriate place to share those things to find them new homes. Any referrals for where to list would be appreciated as there’s not a huge demand for such things in my rural area of southwest MI and not many applicable online groups I’ve found on my own. Or any interest in such things for yourself please feel free to message, I will keep an eye on my dad’s messages and I have pictures of all the art and a lot of the other things that I could share.

Thank you for reading my post and it’s so cool to have found a group where I can see echoes of my dad’s stories within all the posts. 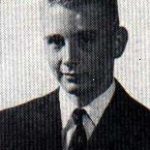 Dick Gleason Class of 1963 reported that John had been killed in an airplane crash, sometime in the 1980’s