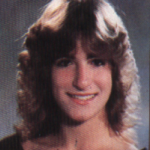 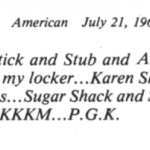 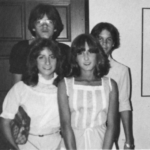 Cynthia (Cyndi) Gearin Hilgartner passed away on June 12th. She was the proud and dedicated mother of two boys, Nicholas and Benjamin; and a devoted and loving wife, sister, daughter, niece, aunt, and friend. She touched those who came to know her with her genuine warmth, kindness, and humor.

Born the older of a pair of twin girls in Norwalk Connecticut on 21 July 1966, she spent her early childhood in Brookfield Connecticut. At 10, her family moved to Taiwan and for the next 8 years, they moved throughout  Southeast Asia from Taiwan, to Manila, Kuala Lumpur, and Bangkok, where she graduated from the International School of Bangkok (ISB) in 1984. Cyndi enjoyed growing up in these different cultures and fondly reminisced about riding bikes through the rice paddies in Taipei, beach vacations in the Philippines, delicious food, including from street vendors, and rock concerts in Bangkok. She was a welcoming friend in these changing environments, a cheerleader for both ISKL and ISB, and editor of ISB’s literary magazine.

Cyndi attended Fairfield University, graduating in 1988 with degrees in English and Education; and married her college sweetheart on October 7th 1989. She began her next adventure as an Army spouse, making a home and raising her two boys in Germany, Georgia, Kentucky, California, Tokyo, Okinawa, Seoul, and Alaska.

She found joy in helping others. While stationed in Germany, Cyndi was employed helping soldiers and family members transitioning from military to civilian life. This experience led her to pursue her passion as a counselor. Throughout long stretches as a solo-parent during deployments and training exercises, she returned to school, receiving masters degrees from the University of Maryland in Educational Counseling, and the University of Alaska in Therapeutic Counseling. She worked within the Department of Defense Dependent School system as an English Teacher and Guidance Counselor in Japan and Korea. She also worked as a Grief Counselor for Hospice of Anchorage, AK, as a therapist for Catholic Charities of Arlington, VA, and most recently as a Licensed Professional Counselor for Upper Bay Counseling and Support Services in Maryland. A committed volunteer, she volunteered her time with Shatterproof, along with local charities involved in fighting the opioid crisis.  While residing in Shenyang, in northeast China, she served as Community Liaison Officer for the U.S. Consulate; and she helped set up the Catholic Archdiocese of Shenyang’s hospice-care system.

Cyndi was a gifted and accomplished artist. She developed an affinity for and mastered local arts wherever she and her family lived. In Kentucky, she was awed by Amish handiwork and became an avid quilter and cross-stitcher, creating her own beautiful and intricate designs. Many of her close friends and family members cherish these stunning quilts. In Japan she embraced the Ikebana tradition of subtle and expressive flower display and won awards for her Ikebana arrangements. And in China, she studied Shanshuihua and created several of these ink and brush landscapes. Her home was a colorful, beautiful fusion of local arts and furniture, treasured pieces from their family travels, and her own arts and crafts.

She was an instant and loyal friend. Those who know her can hear her laughter, remember her mischievous humor, and see her warm smile. She made life an adventure for her boys, welcoming their friends into the home and instilling a sense of wonder and curiosity in all the new discoveries they encountered throughout their childhood.

Cyndi is survived by her husband Lee and their son Ben; her sister Elizabeth (Betsy) and her children Jack and Olivia; and her father John. She is predeceased by her son Nick and her mother Mary Ann, whom she now joins in Heaven. She is also survived by numerous nieces and nephews, cousins, aunts, uncles and the many, many friends whose lives she touched throughout her work and travel.

A Celebration of Life will be held on 7 August 2021 at 2pm in Arlington VA, celebrating the lives of Cynthia and her son Nicholas. Please contact egearin@egearin.com or leehil1000@gmail.com if planning to attend and we will provide directions. In lieu of flowers, donations can be made to Shatterproof (https://www.shatterproof.org/memorial/nicholas-hilgartner) or Covenant House (https://www.covenanthouse.org).