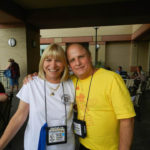 It is with a broken heart that I give tribute to Georgia Moore Crump who passed away March 24, 2018. As I understand, Georgia and her husband were coming home from dinner with friends. She complained to her husband that she did not feel well and to head to the emergency room. Georgia died of a heart attack that evening. She is survived by her husband, son, mother, and her brother Derek (ISB73). Georgia’s daughter passed away June 2017. Her father passed some time ago. In Memory of Georgia Moore Crump ISB, Class of 1972

I have never met someone who was so cheerful, positive, effervescent, and full of life. I have never met anyone who did not like, love, or cherish her. Those attributes certainly kept her from crumbling through the loss of her daughter and as a nurse working in hospice care. Things that would kill most of us.

My fondest remembrances of her lead me back to my ISB days. Georgia sang and played the organ in the Internationals for which I played bass during one of its incarnations. This was not the ISB Young Internationals, which she was also member of, but a pop/soul/dance band that played the Teen Club often. It was a hard-working band that was led by our singer, Loli Pettegrew (ISB70). Between practice and gigs, we spent much time together. On late nights coming home in the back of the Pettegrew’s station wagon, we often slept warmly against each other.

I would visit her and her brother Derek in Florida during college Christmas breaks in the 70’s. We lost touch as we moved on. Georgia became a nurse, married Bill Crump, had a son, adopted a Chinese baby girl, lived abroad. In the late 90’s, she could not resist her fellow ISBings. She started attending reunions. Her work to gather and sing with the Young Internationals at the Daytona Reunion showed how much she was a part of us.

I lost a few days of functionality when her dear friend Lee Quillin (ISB73) reached me and gave me the news. I will forever miss Georgia and her endless smile. May her memory heal my heart. I imagine her spirit is soaring. May it visit us from time to time. Phillipe W. Ritter (ISB73)