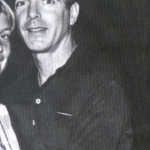 My name is Jun Ikeda, ISB class of ’83, a Japanese national living in Bangkok.

I just browsed through your website and thought I might want to add an info of the former ISB faculty member who passed away.

His name was Timothy E. Keating. I don’t know the exact year he came to teach at ISB but I believe it was late 70’s and he taught photography and was also responsible for publishing of the year book, Erawan, until he left to teach at American school in Egypt in 1982. He also taught at an American school in Teheran, Iran, till the Islamic Revolution that brought Ayatollah Khomeini in power and US embassy hostage crisis there so that was the year he came to teach at ISB.

He died in early 1990 and I learned of his death from his sister in Pennsylvania. I don’t remember his age when he died but he was in his early 50’s. I have visited his sister in PA when I went to US on backpacking trip in 1998 and received a small amount of his ashes in a film case so I can sprinkle in Japan (where he visited but I still do keep his ashes as I moved back to Thailand before I found a good opportunity to do so in Japan).

I wanted his loss to be known on your website in your “alumni search” page as Timothy Keating was a good friend to many of his photography students/Erawan staffs and I thought many of them wanted to know whereabout of his.