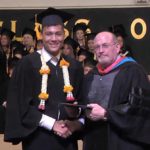 It is with deep regret that I [tardily] notify the ISB alumni community of the passing of Christian Winkles at the young age of 21. Christian graduated from ISB as a proud member of the Class of 2016. He was well rounded and talented, a skilled musician and participant in theater, rugby, and volleyball.
Christian was a gentle giant who lit up every room he entered. While some of this was due to his massive height, it was primarily a result of a radiating, infectious smile that he carried with him. His kindness, brotherly love, sportsmanship, positivity, and care for others are just a few of the reasons his friends, family, teammates, and peers loved and admired him so much.

Christian is remembered by his parents, three brothers, and countless friends, family members, and community members. 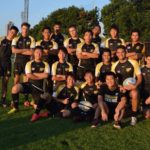 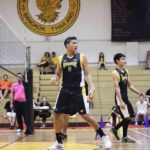 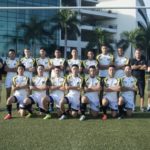 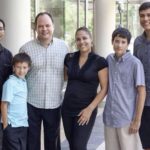 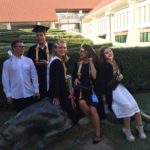 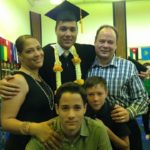 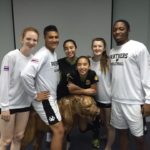 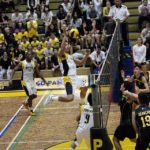 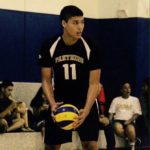 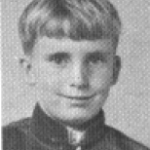 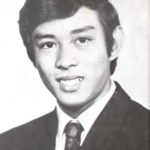 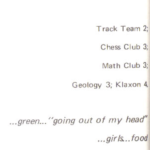 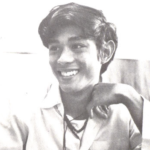 My brother, Felipe “Philip” Aromin passed away this morning. Gone so suddenly and so soon. He will be missed. Philip was ISB class ‘70.

Celebrating the life of Felipe Ballesteros Aromin (April 29, 1952 to December 23, 2019). Join us to share stories and remember a life lived to the fullest. 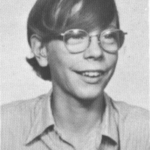 Phoenix – Dr. Robert Allen Kearl, age 63, passed away peacefully at his home next to his loving wife Ruth, his children, and his sister Susy early on the morning of August 22, 2018 in Phoenix.

Rob was born in Madison, Wisconsin to Bryant and Ruth Kearl. Before he was 21 he had traveled and lived all over the world, including Germany, Uganda, Thailand, and Singapore. He graduated from University of Wisconsin-Madison in 1978 and University of Wisconsin-Madison Medical School in 1982. He was board certified in pulmonary disease, critical care medicine, sleep medicine, and internal medicine.

Rob had a mischievous sense of humor, and maintained a powerful dedication to his work without the loss of his capacity for leisure, hobbies, and time with family. He was a devoted husband, a proud father, an extremely indulgent pet owner, and a talented and caring physician. He adored his children, his dogs and cats (and occasionally reptiles), and above all his beloved wife and life’s companion Ruth. He was an avid consumer of books and news, always eager to discuss the events of the day. Even in his last days, Rob had to be learning something — re-watching the Ken Burns documentary on the Vietnam war, listening to podcasts about the civil war, and refreshing his knowledge of the Thai language.

He is survived by his wife, Ruth, his three dogs, Samantha, Scout, and Moseby, as well as his two cats, Hank and Priscilla Peabody. He is also survived by his two sisters, Susy and Kathie; his three children, Bryant, Megan, and Alex; his granddaughter Madeleine; and Ruth’s son, Sam, and her grandson Cameron. Rob was preceded in death by his parents, Ruth and Bry Kearl, and by his brother, Dick Kearl.

Rob wishes to spend his days among the places he loved, and so his ashes will be spread in Arizona, Wisconsin, and Thailand at a later date. In lieu of flowers, the family asks that donations be made in his name to the Cancer Research Institute. 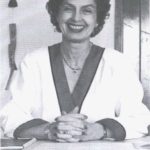 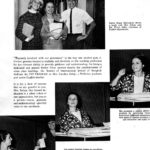 Mrs. Saluja taught a variety of subjects during her twenty-year tenure, including French, English, and Writing Workshop. She is survived by her husband and two sons who still live in Thailand. The Seniors of ISB dedicated the 1967 ERAWAN to her. The last time she appeared in ERAWAN was in 1987, 20 years later, in memorial. Much loved, she will be missed by those many whose lives she touched.

She is survived by her husband and two sons who live in Bangkok. 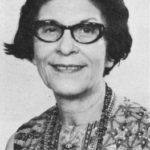 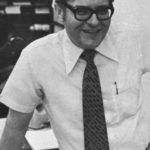 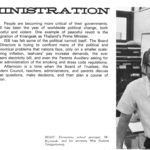 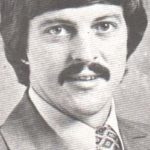 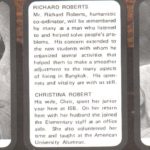 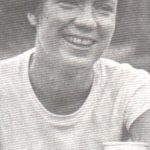 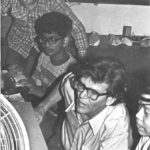 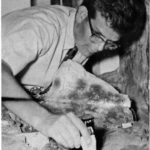 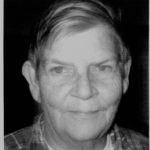 I received the sad news today that former science teacher Phil Reeves passed away this morning in Marshfield, Massachusetts. He was 87 years old. He had been ill for just three weeks and died peacefully. I talked with his neighbor, Leslie, who has cared for him for the past 20 years. She said that he was greatly loved by everyone in his church family and they all knew how much his connection with the ISB alumni family meant to him. When Phil was in the hospital she wanted everyone to know who this amazing man was and she told everyone about his history as a science teacher beloved 40 years ago and today. Phil teared up and said, “Yes, my students were my children.” Leslie also told me how much he loved to dance at church. I told her we knew all about his dancing prowess as we witnessed it on the Teen Club dance floor at the reunions. A small funeral service will be held on Thursday. Phil was very committed to his Christian faith and wanted any remembrance donations be made to: