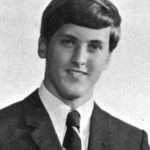 I remember that at the time Harold was taking karate lessons. He was very proud to demonstrate his new moves for me every week. He liked to make fun of his karate teacher. One time after a lesson, he pointed at his right hand (the one he used for karate chops), and said to me in a Chinese accent, “Is lock (rock).” Then he pointed to the other hand and said, “Is pirrow (pillow).” I thought it was hilarious, so he’d say it again every so often just to see me laugh. I also remember he had been on a winning crew team before he came to ISB. We both moved from Bangkok back to Virginia , so we met again in late 1968. I went off to California in early 1970, so that was the last time I saw him, but I was certain that he was going to be very successful.

Please let me know if you learn anything more about what happened to him.