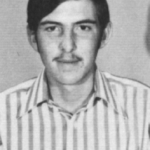 On March 28, 2011, George Andrew Clark went to be with our Lord and Savior after a lengthy illness. He was born to George Palmer Clark and Catherine West Clark in Wichita Falls on Feb. 18, 1955. Andy spent his first career as a clinical laboratory scientist specializing in hematology, special coagulation and bone marrow HLA typing.

After a severe accident with brain injury, he returned to school at UTSA where he graduated in history and went on to perform graduate studies in constitutional law. He loved tennis and golf and was an avid reader. His passion in life was challenging to reach their potentials.

He was preceded in death by both parents and grandparents.