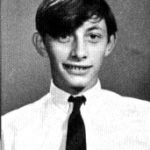 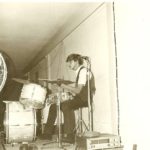 Roger Brady. It was over 30 years ago since last seeing/knowing Roger but I will never forget him nor things about him..

He and a number of others were part of the families evacuated from Vietnam. He and Peppy Doggett entered the classroom I was in, and ISB became alive for me.

I think I was one of the first of our class to get to know Roger. A spark of interest crossed between us in that classroom and I’m glad he pursued it. He was full of life, confident, fun, attentive and caring….but all guy, winner of the Golden Gloves title in the US, tough guy, liked by most. I think back and feel really fortunate to have had some time to really get to know Roger.

Roger wasn’t there our senior year, Sept. ’67 – June ’68 and he was missed. Many, many years later, just when I was starting to find some of my ISB friends, I learned in 1992 that he was killed the year prior in an auto accident. Its so hard to accept the loss of departed classmates. My ISB years had been 30 years prior, and yet they are more a part of me than so many of the years I have spent in the States since returning. My ISB classmates/peers are very dear to me. Roger and I remained good friends, even after we stopped seeing each other. He never stopped looking out for me. He was always there for his friends. A memory of such a time happened in ’67. We were all down at Barbo’s in Pattaya and I had had a drink or so. Roger and Marybeth came to my rescue. Roger came up and took me away from whoever I was with, saving me from my clouded judgment. He knew me and knew I was not being myself and not totally in control of my actions. He and Marybeth escorted me out of Barbos and back to where I was staying. As I’m sure many of his friends would attest to, Roger was there for you at the times when you needed him. I miss you Roger and I am so sorry we didn’t have the opportunity to reconnect through our wonderful ISB Network that so many of our classmates have put so much of their time/money/energy into to make so great.

The picture of Roger in the stance is a picture he gave me when we first started seeing each other. It was taken in Saigon prior to their evacuation. 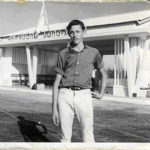