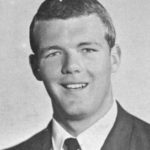 Mikell was famous at ISB for throwing the discuss and being a great athlete.  He loved football and other sports.  He could throw the discuss twice as far as any Thai competitor (or so it seemed).  The class of 70 should remember him as our football coach for the class rival games.  I will always remember him because I was sprinting a 100 yard dash during cross country training and without seeing us he had hurled the discus down field and it zinged right over my head, missing my skull by about two inches.  This surely would have been my demise if it had made contact.
Mike was an avid surfer and actually made surfboards professionally.  He has made surfboards for famous surfers including Ben Aipa. Mike died of a heart attack while surfing near his home in Little River, South Carolina. All the local surfers and others, did a ceremonial wake for him, honoring his life. His father is a career marine and was stationed in Pattaya in the late sixties.  Mike also lived near San Diego when he came back from Thailand.

I had been trying to find Mike ever since 1970 because I knew he was probably in California but when I did finally find his family, in 2006, his mom gave me the sad news.  I had a nice heart felt phone conversation with her about Mike and his life.

I wish Mike could have made it to a reunion because I know he would have really enjoyed seeing his old buddies.
MW Brougham 70