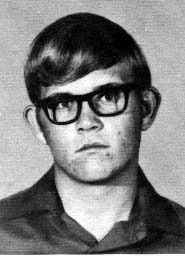 Here are the details on my Brother:

Born on Oct 5th, 1955 Passed away Dec 2nd, 2009 @ 3:40 pm at home with his family around him.  First diagnosed in 2002 with pancreatic cancer he fought it into submission after he was told he had 3 months to live.
He remained in remission for 6 years until cancer made a comeback on him early in 2009.He fought it until the end not wanting to leave his girls and family. He had his last chemo and Dr Visit November 30. And called me that day and said bro, I don’t think I can hang in there much longer. We called Hospice in Tuesday morning and they had a hospital bed sent out which we set up in his living room. Early Wed morning his youngest daughter called me to come over that he was going down hill fast. He was semiconscious but was in pain so we got Hospice to medicate him so he was not In pain.

We had a only one cousin that had not made it there yet coming from Gainesville Fl and she arrived At 3:15 . Just like Jim, he waited until everyone made it to say goodbye. He passed 15 min later. He love Thailand and ISB and was so upset that we came back to the states right before his senior year. He had a 23 year career in the USAF and retired as a SMSGT. He had also earned his masters degree in business. While in the Air Force. From 1996 until 2003 he worked as a project engineer in the Boston Area until the cancer changed his priorities and he moved back to Florida to be around family and to set up his family here in case. The cancer returned. He made it to the Williamsburg and San Diego Reunions.