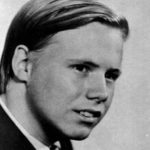 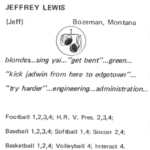 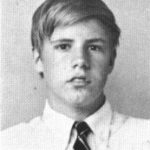 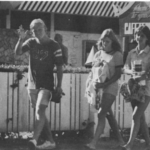 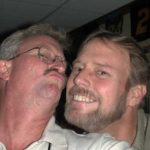 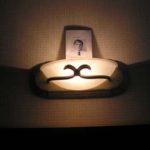 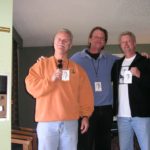 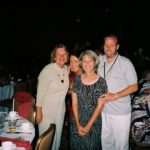 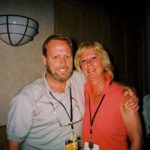 Entered into eternal rest, April 19, 2004, Jeff Lewis, 50, beloved husband of Jane E. Anderson Lewis of Branford, brother and brother-in-law of Mark and Jennifer Lewis of Shirley, MA, Eric Lewis of Wallingford and Steve Lewis of Oakton, VA, uncle and Godfather of Josie Lewis of Oakton, VA, nephew of Reverend Richard and his wife, Margaret Wiborg, cousin of David and Chris Wiborg, Kim and Sue McIntyre and Robin Campbell and son-in-law of Betty Anderson of East Haven. Predeceased by his sister, Karen Lewis and a brother, Richard Lewis. Jeff was born in Little Falls, NY, Sept. 28, 1953 a son of the late Philip and Phyllis Wiborg Lewis. He graduated from the International School of Bangkok, Thailand in 1971 and Ohio Wesleyan University in 1975. Memorial service at BEECHER & BENNETT, 2300 Whitney Ave., Hamden, Sat., April 24 at 11 a.m. In lieu of flowers memorial contributions may be made to the Cystic Fibrosis Foundation, 6931 Arlington Rd., Bethesda, MD 20814 or to National Multiple Sclerosis Society, 705 N. Mountain Rd., Newington, CT 06111.

Tribute to a Friend

I just arrived home from Branford, CT., where I attended Jeff “Kuhn Jebree” Lewis’s Memorial Service. There were five of us from Jeff’s extended ISB family in attendance, Bob Athearn, Mark Brandes, Diane Curtis-Bull, Deb Twing-Thomson and myself. It was of course a celebration of life but nonetheless a sad time as well.

Branford is a beautiful town just outside of New Heaven and the weather could not have been nicer. The flowers and trees were in full bloom, and the sun was shining with the temperature in the upper 60’s; it was a glorious day to pay tribute to our dearly departed friend.

Jeff had struggled with health problems over the past five years or so, but the unexpected and sudden departure last Monday afternoon came as shock to us all.

We met many of his local friends and of course his entire immediate family. In interacting with them we were able to share much of what we knew of Jeff and they with us. By all accounts he was loved by many and in talking with his closest friend and college roommate John Kingsbury, I learned that Jeff had talked of his ISB friends and experiences many times. In fact John said, “Dave I’ve heard all of your names so many, many times over the years. The stories of Thailand and ISB used to amaze me. Those first years in college, Jeff would go on and on with the stories of Thailand and ISB. I thought he would never stop and believe me he never did.”

His brothers, Mark, Eric and Steve said, “When Jeff found out about the ISB Network and attended his first reunion, he came home bouncing off of the walls. He just went on and on about the reunion and the people he saw there. Jeff was always excited about the prospects of every reunion. We never could fully understand his feelings but now after seeing you guys come all the way up here to honor him, meeting and talking with you, we think we now understand his strong connection with all of you.”

I think we all found comfort in Jeff’s uncle, Richard “Uncle Dick” Wiberg, a retired minister, whose stories of Jeff’s life mixed with the words of his faith were refreshingly appropriate.

His niece, Josie Lewis spoke of her love for her Uncle Jeff, revealing his love for children and the patience and limitless time he gave to them all. Josie’s words were those of someone far beyond her years.

His youngest cousin, David Wiberg, portrayed the yearly gatherings at the family cottage in New Hampshire. Jeff was the one who taught them all how to water ski and David took pride in being the last of the cousins that was taught to ski by Jeff. His words painted a very clear picture of who Jeff was.

As per Jeff’s wishes he was cremated and the family has asked that donations be sent to the National Multiple Sclerosis Society-Greater CT. Chapter, 705 North Mountain Road, Suite G102, Newington, CT. 06111-1411.

His brothers, Mark, Eric and Steve; and his wife Jane, are all planning to attend the St. Petersburg reunion. We plan to toast his life at 12:00 Midnight on Friday, August 13th. I think it only appropriate that we do so on the beach, with bare feet in the sand.

There were many, many stories and anecdotes that were both funny and sad but unlike last week, the raining in my heart has slowed and the sun has begun to peek through the clouds.

To his sweet wife Jane, Jeff was blessed to have you and I feel very fortunate to call you my friend.

I hope all of you that were close to Jeff will find comfort in knowing that he loved his ISB friends and family but has gone on to greater rewards.

I’d been trying for years to find Jeff on the Internet, and was greatly saddened to learn he passed away in 2004. I came across an entry on the isbeings site, and so I thought I pass along a remembrance of Jeff. I worked with Jeff at the U.S. Forest Service during the 1970s. We both survived on temporary gigs with the Connecticut-based Northeastern Forest Experiment Station until we went our separate ways. It was a good time and place to be young, and I remember Jeff vividly. I recall him as intelligent, articulate, complex, rowdy and driven by an exceptionally strong moral center. He spoke often of his time in Bangkok. He was an incredibly precise driver with lightning reflexes, which – if I’m remembering this right – he attributed to having learned how to drive in Egypt. We were basically just kids but I knew he would become a good man. In those days his ambition was to become a writer, and that’s how I have always imagined him.

what you do when your sad……. and heavy laden, you reach deep……and beyond……give love….till your gone……. but not forgotten

find your light………………….shine it down on everyone