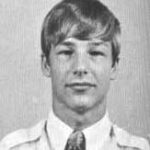 Eric and I were friends in Bangkok over several years in the late 1960s. I used to go to his house, which his mother Laure made so welcoming, and hang out with him before heading out into the Bangkok night for what kinds of fun I can’t remember, though I’m sure it included Mario’s Pizza in the Gaysorn shopping area. We once took a trip to Vientiane, Laos, together with his sister Arla, my brother Richard, and a woman who ostensibly was a chaperone. Eric was funny and smart, and always had his own way of dressing, mixing Carnaby Street mod with funky paisley ties and whatever else was around. I remember that during the trip to Vientiane, Eric spent a lot of his time reading in his bunk. It’s been many years since Eric died so suddenly, riding his motorcycle in Iran with his girlfriend, trying to get to Europe in a hurry; unfortunately, in Iran, the trucks in the mountain passes just turned off their lights at night and parked in the road. The only redeeming thing that can be said about someone having died so young is that Eric lived a full life, as young as he was, and left behind with anyone who ever knew him his infectious laughter and smile.